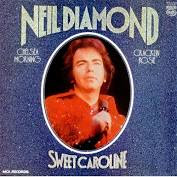 A new Sunday series which the musos amongst you would probably do well to avoid.

My room mate at work Val  had been threatening to give me some records from her attic for ages and returned from a week off with a bag containing  around 30 albums and 12" singles.

It's a bit of a mixed bag. There are a few that I like, quite a lot that Mrs CC likes and a few that neither of us like.Some will be kept and some wont

Sone artists appear on more than one occassion but will only feature once in this series. Neil Diamond appears to be the most popular with four appearances ,

We have taken to playing a random  Val's vinyl selection over dinner the most recent being Mr Diamond's Sweet Caroline  on MCA/Music for Pleasure. Yours for between £5 and £15 on e-bay or for nothing if you are a roomie of Val's

Mrs CC is a fan and I think that there are a lot worse out there than Neil so probably a keeper.