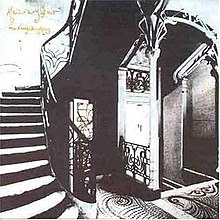 The penultimate Fort William purchase and indeed the penultimate holiday purchase is She Hangs Brightly the 1990 debut album by Mazzy Star on  Rough Trade although my copy is the re-release from Capitol Records from later on in that year. 30 years ago - wow.

A band that past me by at the time but one which I discovered via the blogging community and this is now the third of their four albums which I have on the shelves.

The mainstays of the band were Hope Sandoval on vocals and David  Roback on guitar, keyboards and piano and the man who wrote almost all the music and recorded all the songs.He was previously a member of Paisley pattern band Rain Parade and sadly passed away in February this year at the age of 61.

Rolling Stone describes the album as coldy beautiful with Allmusic declaring Hope's vocals to be sultry. It was also one of Kurt Cobain's top 50 albums of all time.

If you want a copy of the vinyl re-issue it's yours over at Rough Trade for £44.99 which is about £44 more than I paid for the CD

Mazzy Star - Be My Angel