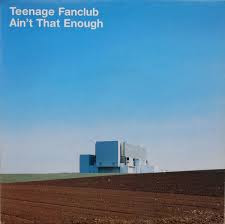 Teenage Fanclub singles are just like Corporation buses - none for ages then two or three come along at once.

A couple of months ago I picked up Mellow Doubt a single from Grand Prix  in a local charity shop and then during my holidays I picked up not one, but two from Songs From Northern Britain in Muir of Ord.

I've spaced tham out a bit featuring Start Again as the first post from that particular haul leaving Ain't That Enough as the last of the six purchases.

Ain't That Enough is the second track on SFNB but was the first single released from the album and was released in June 1997. As was the norm back then there were two different versions released . The one I acquired has Torness Nuclear Power Station on the front cover with the other two songs being Kickabout and Broken, two .songs by the band.. The other version had covers of the Velvet's Femme Fatale and Alex Chilton's Jesus Christ.

I'm not sure whether Brian will be as impressed with the " b-sides" as those on Start Again.

On returning from holiday I picked up the re-released vinyl versions of Grand Prix and Songs From Northern Britain meaning that I now have the lead songs from the 3 singles on vinyl, CD, CD Single and digital formats.