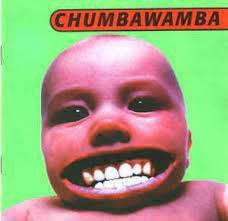 I've seen this on  a number of occassions and never thought to pick it up.However I was on a roll so I thought I would give it a listen.

I was a bit apprehensive as I've always considered Tubthumping to be a bit of a novelty song. It reached number 9 in the UK singles chart after being released in August 1997.

Tubthumper was the first album by Chumbawanba to be released on a mainstream label namely EMI and reached number 19 in the UK charts. It sold a staggering 3.2 million in the States. There may well have been more shifted as Alice Nutter gave an interview encouraging folk to steal it from the larger chains.

Not bad for an anarchist and socialist band whose first album from 1986 was called Pictures of Starving Children Sell Records. Their signing to EMI led to Oi Polloi  releasing an EP called Bare Faced Hypocrisy Sells Records.

Suddenly they were everywhere and all over the papers particulalry when Danbert Nobacon poured a jug of water of Labour Deputy Leader  John Prescott at the BRIT awards. They had changed the words of Tubthumping slightly following Labour's refusal to support the Liverpool Dockers Strike but it still seems strange that they appeared at these awards.

The album doesn't do much for me. and indeed to received mixed reviews. I'm not convinced that it's a keeper. Not because it is the worse CD I've ever bought or even the worst from this haul. I just don't see me listening to it again.