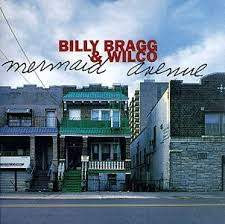 I was playing Mermaid Avenue (the first one ) by Billy Bragg & Wilco over the weekend and was wondering whether it had featured here or not. Over eight years now and it turns out it hasn't. Time to right that wrong.Obviously both acts have featured here several times in their own right.

Mermaid Avenue , Coney Island is where Woody Guthrie lived with his family in the late 1940's and early 50's. Here he wrote hundreds of songs which he never recorded.When he died he left only the lyrics. Billy Bragg and Wilco have written new tunes to these songs. Features California Stars plus guest vocals by Natalie Merchant.

That pretty much covers it  other that to say that Billy was asked by Woody's daughter Nora to carry this out. There was a subsequent falling out between Billy and Jeff Tweddy  but not before Volumes II and III and The Complete Sessions were commited to tape.

Billy Bragg & Wilco -Way Over Yonder in the Minor Key