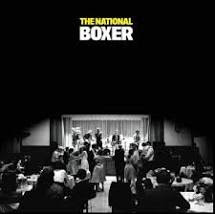 When I picked up Alligator my first album by The National a couple of months ago it was obvious that further exploration was required.Therefore I asked for recommendations.Echorich replied that all their albums were essential but in particular Boxer and High Violet.

Therefore it was another no- brainer when I saw Boxer on the shelves in Fort William. From 2007 on Beggars Banquet it is the follow up to 2005's Alligator. High Violet is the next one from 2010 so this was perhaps their purple patch?

There were three singles from the album - Mistaken For Strangers, Apartment Story and Fake Empire. All good songs but I have gone for another two. Squalor Victoria was the one that immediately jumped out and grabbed me.Sufjan Stevens, a neighbour of  band members the Dessner brothers, makes an appearance on Racing Like a Pro

I've now got my eyes peeled for High Violet.