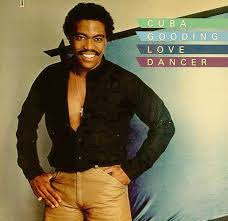 Week two of Val's Vinyl and it is time for the Love Dancer.

If the name Cuba Gooding rings a bell I suspect that it may be because you are thinking of his son the actor Cuba Gooding Jr.

The 1st Cuba Golding Album was not surprisingly the first of these with today's Love Dancer being the recond. It looks as though they pretty much sank without trace, apart from in Val's world, as I can't find out very much about them.

But Hey! The Party's in Here