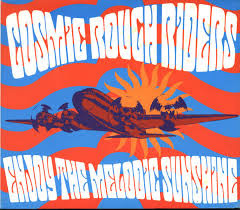 I know, I know .It is probaly not event Country Music let alone Americana but I don't really care, It is near the end of the series and there is hardly anyone still along for the ride. It's on the blue shelves so it is going in.

Never mind your Gram Parsons with his Cosmic American Music here are the Cosmic Rough Riders with some Cosmic Castlemilk Music.

Trying to concieve the Cosmic Rough Riders’ opus in one sentence would sound something like this: The country incarnation of the Byrds from the end of the ’60s trying to play their mid-’60s songs with an addition of some Beatle/Chilton harmonies sung by C,S&N… - Pop Diggers

See I told you - Americana!

They had a few more albums but were at their best with their two main men of Stephen Fleming and Daniel Wylie. After Wylie left to go solo,  and releasing the excellent Ramshackle Beauty, they still came up with some pretty good records but they were never quite the same

Brothers and sister gather round and enjoy the melodic sunshine.