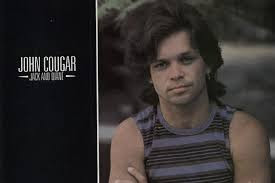 A wee break from the most recent haul.

A few weeks ago Mrs CC came in with some bits'n'bobs including two 1982 singles by John Cougar. Now John Cougar as I'm sure you are all aware is in fact John "Cougar" Mellencamp or more properly plain old John Mellencamp.

The Mellencamp was dropped by his label Riva and Mainstream Management as they considered it to be too Germanic to be marketable. The 70's were strange times . Fair play to him as once he made the commercial breakthrough he insisted that Mellencamp be restored

The two singles were from his breakthrough 1982 album American Fool which was his  fifth studio album. Although he looks about 14 he was in fact 31 at the time. He was quoted in 1984 as saying  to be real honest, there's three good songs on that record, and the rest is just sort of filler,

It's a song that I've always had a bit of a soft spot for and until recognising  Hurts So Good was the only one of his that I was familiar with.