The Songs of Robert Burns 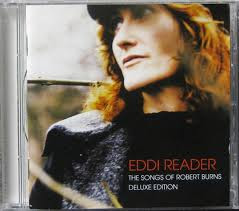 The final Alford offering is Deluxe version of the Songs of Robert Burns by Eddie Reader.Originally released in 2003 it was re-released  in  2009 as a Deluxe version with seven extra tracks to commemorate the 250th anniversary of the Bard's birth. Both versions were released on the Rough Trade label.Produced by fellowmusicians John McCusker and Boo Hewerdine who also form part of the backing band.

It was purchased before HAIM but I've held it back slightly as i felt that it was a more appropriate choice for a Sunday.Like HAIM it replaced  a copy on the shelves but unlike Haim this one is a keeper.

In the sleeve notes Eddi writes that  when her family were re-located from Arden in Glasgow to the Ayrshire new town of Irvine how it saved my life to be introduced to an alternative Scottish beauty and language... I often thought Robert Burns was for the highbrow and not the likes of me, the hardly educated, council estate, overspill girl. Now I see that I was wrong and that I am precisely the person Burns wrote for.

The album highlights that Burns was a great songwriter as well as a poet. Were he alive today it would be interesting to read his musings on everything that is currently going on.