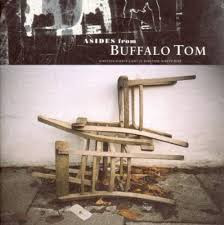 2020 Charity Shop Purchases 53 - Buffalo Tom Asides From Uncle Tom
Buffalo Tom were always one of those bands whose name I was aware off but whose music I wasn't .
Then not as I originally thought as a couple of years ago but in fact as far back as  December 2016 I finally got round to picking up one of their albums (Big Red Letter Day)
When I posted it in the comments section the Robster stated that  If you come across their Best Of collection 'Asides From Buffalo Tom', buy it!
I must admit that his words were not in my mind when I spied it in Muir of Ord. On the basis of what I hadheard  before I would have picked up anything by them. This collection of some of their best known songs from 1988vto1999 totally justifies that decision.
Summer, which is one of the few tracks I had heard before is taken from their 1995 album Sleepy Eyed on the Beggars Banquet label In the sleevenotes band member Chris Colborn describes it as a sensory reminderof the anxious last few days of the rest of your life. Oh to be young and carefree again
Taillghts Fade is taken from their earlier 1992 third album Let Me Come Over.
Not really a duff track on the album although I could probably live without their fairly faithful cover of The Jam's Going Underground although they show it some respect and appear to be enjoying themselves.
Buffalo Tom - Summer
Buffalo Tom - Taillights Fade
Posted by Charity Chic at 08:00