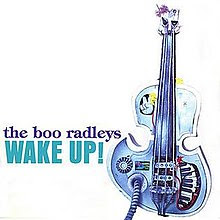 2020 Charity Shop Purchase 43 - The Boo Radleys
I'd never bought any music in the Blysthswood Care Charity Shop in Newtonmore before just a rather fetching dark green retro corduroy shirt.
I managed to break my musical duck on the way to our first week's accommodation by purchasing Wake Up!  a 1995 album by The Boo Radleys on the Creation label. The band's name being of course taken from a character in Harper Lee's brilliant novel To Kill a Mockingbird.
Confession time I thought that this was their debut album whereas it is actually their  fourth. I would be hard pushed to name or indeed recognise any of the the 5 others they released between 1990 and 1998. At a push I might recognise it's 1993 predecessor Giant Steps. I have a CD single of the song Barney (... and Me) from that album which also has a cover of Fat Larry's Zoom ( from before Zoom was a household word).
I digress Wake Up! is a fairly pleasant indie pop album with some good tunes Not one that I'll play that often but definitely a keeper. Here are two of the three singles of the album.
The Boo Radleys - Get Up Boo!
The Boo Radleys - Find the Answer Within
Posted by Charity Chic at 08:00