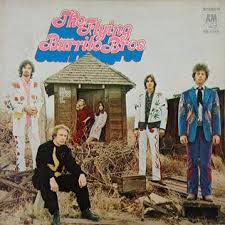 I hope you will forgive me of I indulge in a little cutting and pasting from a previous post  in respect of this weeks offering The Gilded Palace of Sin by The Flying Burrito Brothers as it is pretty much what I would have written today:

Released in 1969 it is one of the two landmark albums from this era featuring Gram Parsons (the other being The Byrds with Sweetheart of the Rodeo from the year before) which changed the face of country music.Without them I seriously doubt whether I would ever have  ended up with the vast majority of  the 500 plus Americana albums that grace the shelves today.  Indeed  it is likely that many of the acts  would probably not  even have existed .Featuring the classic line up of Gram Parsons, Chris Hillman, Chris Ethridge and Sneaky Pete Kleinow..Let's face it even if the music was rubbish, which of course it isn't, you would buy it for the cover alone with the band sporting some magnificent Nudie suitsNot a commercial hit at the time it's influence has since been  universally acknowledged.

I could also have  maybe mentioned that whereas the first 10 tracks are absolutely essential I can live without the final one Hippy Boy.

Oh, and with the possible addition of Burrito Deluxe this is really the only thing you need from the varioua iterations of the band. Anything after Parsons and Hillman is not worth bothering about

I hope you've got your recruits and your green mohair suits and that  you've showed your I.D. at the door