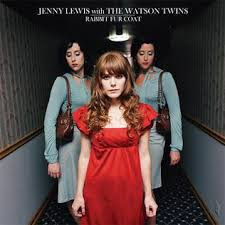 Some of you may be wondering why indie darling and former Rilo Kiley front woman Jenny Lewis is featuring in an Americana series. Well wonder no more.

Throw in M Ward, Connor Oberst, Ben Gibbard (from Death Cab for Cutie) and the country gospel harmonies of The Watson Twins (Chandra and Leigh) and you have a bona fide Americana classic on your hands. Heck, they even throw in  a cover of the Travelin Wilbury's Handle with Care  for good measure

Released in 2006 on Rough Trade in came out prior to the final Rilo Kiley album Under the Blacklight from 2007 and is a considerably better record.

The Watson Twins released their debut EP Southern Manners simultaneously with Rabbit Fur Coat and have been releasing records of their own ever since.

The title track has very much aof a gothic feel to it and Pitchfork alludes to the Shining-esque album cover above.

Jenny Lewis & the Watson Twins - Rise Up With Fists!!