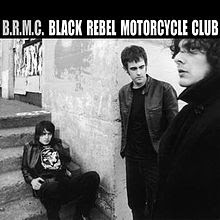 Huntly is a pleasant little town in rural Aberbeenshire although I much prefer its previous name of Milton of Strathbogie.However, the town centre on the Tuesday we visited resembled a ghost town with hardly a soul about. Probably due in no small part to the huge Tesco on the main road bordering the town. It did however have a couple of charity shops.

Llke me I'm sure that many of you recognise the cover of B.R.M.C. the 2001 debut album of San Francisco band Black Rebel Motorcycle Club. I was familiar with the cover but not necessarily the music.

I would describe them as a cross between The Strokes and The Black Keys although I'm not necessarily sure whether in  agood way or a bad way. I seem to remember a fair bit of hype when this came out.Some of the songs , like the two below are not too bad. Heck, the second one even featured in a Vin Diesel film and Skins. The jury is still out as to whether it is a keeper or not. Another couple of listens are probably required.

It seems that they have released another further seven albums (all with black and white covers) but my curiosity is pretty much sated.