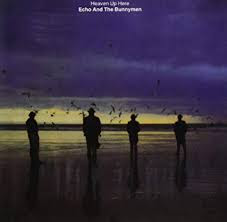 I've a few new ones to share with you from my holidays but first here is the first of the two remaining from my pre holiday Battlefield Road haul.

They were held back slightly as the are both second albums from the bands who featured before .Last time round (number 34) I featured Echo and the Bunnymen with Ocean Rain.This time round it is Heaven Up There their second album from 1981 on the Korova label and Swiss Adam's favourite.

Reaching number 10 in the UK album charts it was also a favourite of the critics winning the Best Dressed LP (whatever that is) and Best Album in the 1981 NME awards being described as darker and more passionate than Crocodiles.

Record Mirror goes even further saying thatt he album  offered an anatomy of melancholy, resplendid with the glamour of doom. Just the thing then for all the serious young men in raincoats - you know who you are!

I've opted for the two singles A Promise which reached number 49 and Over the Wall which didn't trouble the charts.

Echo & the Bunnymen -A Promise

Echo & the Bunnymen - Over the Wall