50 Americana Albums You Should Hear Before You Die - Static Transmission 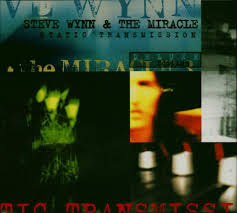 Although vaguely aware at the time of The Dream Syndicate he first came properly  to my attention during his solo career in the early 90s.I've a couple of his solo albums (Melting in the Dark(1995) and Sweetness and Light (1997) )which fit neatly into the Americana genre.

I also saw him at King Tuts in 2002 as part of an acoustic Song Circle alongside Americana icons Walter Salas -Humara (The Silos) and the late Robert Fisher (Willard Grant Conspiracy).

I've gone for the later where he performs with the Miracle 3 - Dave Decastro (bass), Linda Pitmon (drums) and Chris Cacavas (keyboards)

Some great thrashy tracks such as Amphetamine but for today's purposes these are the ones which hit the spot.

Steve Wynn & the Miracle 3 -What Comes After