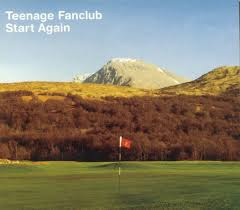 Following our week in Alford we set off on a rainy Saturday moving from the East to the West Coast village of Lochcarron.

En route we took a slight detour to Muir of Ord in search of a bowl of soup. No soup was forthcoming but a ten minute stop at the Blythswood Care charity shop proved to be very fruitful indeed.

You never turn down an opportunity to pick up a Teenage Fanclub single particularly when it comes from their best album Songs of Northern Britain.

Start Again, a Norman Blake song, is the opening song on the album but was the third  and final single from  the album being released in October 1997 on the Creation label.

As is the way of these things there were two versions of the CD single .This one with a cover photograph by Donald Milne of Fort William Golf Club with Ben Nevis seems to be the most sought after of the two currently going for £7.95 on Discogs.

Teenage Fanclub - How Many More Years ?

Teenage Fanclub - Nothing To Be Done