And The Surrounding Mountains 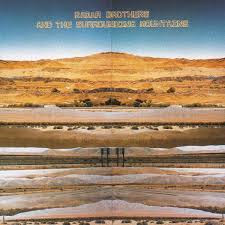 I'd never heard of Radar Brothers but was happy to take a punt as with the cover and album name and some of the other records I was picking up I was fairly certain that it was an Americana album. Well it is and it isn't.

Radar Brothers are an American band variously described as indie, slowcore and alt-country.Formed in 1993 And the Surrounding Mountains is their 3rd album from 2002 on Merge Records in the US and Chemikal Underground in the UK. I must admit that they fact they were own Chemikal Undersound threw me a bit.

The line up for this album is Jim Putman (guitar, vocals, keyboards), Senon Williams (bass) and Steve Goodfriend (drums)

The Chemikal Underground website describes it thus Melancholy it is, certainly, but in that warm, eye-watering way that makes you want to be in the company of friends in your favourite bar as the sun sets gently on the loch outside (everyone's favourite bar has a loch outside it right?) The Radar Bros. evoke such a brilliant sense of the outdoors, of longing and of thoughtful reflection that we suspect the only true place to listen to this album is on a long Greyhound bus journey as the landscape dances past the window...Do you think we're talking pish? We're not: it's true.

The AV Club feel that they are more interested in emulating the mellow moments of Meddle-era Pink Floyd than The Jayhawks or Low. Cant see it myself

I wasn't sure of it after the first play in the car but after a second play on the hi fi I am completely hooked. Achingly beautiful. Oh, and it's going on the Americana shelves

Radar Brothers - On the Line