50 Americana Albums You Should Hear Before You Die - BR5-49 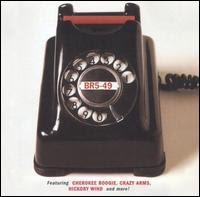 There is an arguement (and probably a pretty strong one at that) that BR5-49 are not actually an Americana band. It is more country with just a shade of rockabilly.

However in the music room there are two country sections - mainstream and the rest. The rest which is largely Americana occupy the blue shelves as opposed to the white ones and it is from the blue shelves that I selected the 50 albums for this series last November.

BR5-49 were a Nashville band . The name BR5-49 is  the telephone number of a used car dealer in a running comedy sketch from the American TV series Hee Haw

They lost the hyphen somewhere along the way around the time that they also lost their front man Chuck Mead. A word of advise  no hyphen there should equal no purchase.
Arguably you only need today's featured eponymous debut album from 1996 on the Arista Nashville label and the excellent mini album Live at Roberts also released in 1996.
They shone briefly but brightly.
I saw them live once on the Renfrew Ferry and it is up there in my top 20 gigs of all time (another potential series maybe)
There are a number of covers on the album including Hickory Wind and Crazy Arms but I have gone for three of their original compositions the first having been written by Gary Bennett and the other two by the aforementioned Chuck Mead.
You may well find yourself going Hillbilly Nuts if you give this a listen.
BR5-49 - Even If It's Wrong
BR5-49 - Little Ramona (Gone Hillbilly Nuts)
BR5-49 - Chains of This Town
Posted by Charity Chic at 08:00