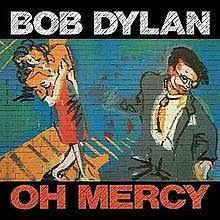 Shortly before leaving St Andrews we decided to have one final trawl of the Charity shops .
In the British Heart Foundation shop I spottted a CD of Oh Mercy the 26th studio album by Bob Dylan for 99p and given the paucity on show I eagerly grabbed it.
I was aware that it was from a time in Bob's career which can be kindly described as not his best and indeed it is the only one of his I have between 1981's Shot of Love and 1997's Time Out of Mind.
It is produced by the ubiquitous Daniel Lanois.
It was therefore with a degree of trepidation that I gave it a spin. I must admit I was pleasantly surprised. Obviously not his best but certainly not his worse.
I've subsequently seen it described as a return to form following albums such as Empire Burlesque, Knocked Out Loaded and Down in the Groove.

Mrs CC then came over with a vinyl copy of Ennio Morricone's Soundtrack to the film The Mission.
I then decided to have a look in the vinyl section ........ and .. to be continued in due course!

Bob Dylan - Everything is Broken