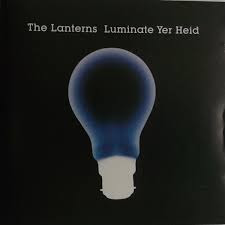 Now that he has retired regular commenter Spence has been systematically going through his music collection from A-Z deciding what to keep and what to discard (the only problem being that he keeps acquiring new stuff thus somewhat defeating the purpose!)
I had envisaged doing something similar when I come to hanging up my boots.
However as I mentioned last week lack of space has sped up this process albeit at a very slow one disc a week pace.


This week's burn under the spotlight is Luminate Yer Heid by The Lanterns from 1999 which was on Columbia.
I'm not quite sure as to how this one originally crossed my radar.
From Sighthill in Edinburgh the band  were signed up by Kenny McDonald the manager of The Proclaimers. The members were singing sisters Sylvia and Gina Rae and guitarist/songwriter Jim Sutherland.


Luminate Yer Heid - the verdict.  It's a keeper. Excellent bouncy synth pop with a Scottish twang.I'm kicking myself for having neglected it for so long. It will be taken from it's new slimline case and played more regularly in the future.

The Lanterns - Winter in my Heart