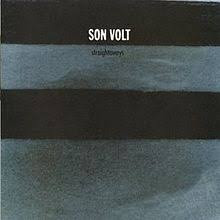 The recent Son Volt and Uncle Tupelo ICAs by HYBRID SOC PROF over at JC's place are causing a lot of excitement down Portugal way.
George is having great fun exploring the back catalogues of both of these bands in which Jay Farrar features.
Me, I currently have more stuff by Uncle Tupelo than by Son Volt although George is doing his best to change that.
On the Son Volt front I only have the 1997 album Staightaways and also  Sebastapol a solo album by Jay from 2001.
Checking my ticket box for something else the other day  I  found out that I saw Son Volt at King Tuts on Saturday 8th November 1997 paying £6 for the privilege.
I also saw Jay Farrar on Saturday 31st March (the ticket doesn't say what year but some internet research says 2001) in the 13th Note Club at a cost of £10.


A quick check of the archives tells me that Son Volt have never featured on these pages before so here are a couple from Straightaways to right that wrong.
Sparse - but in a good way.

Son Volt - Back Into Your World