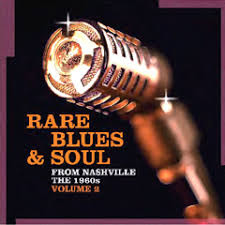 Rare Blues & Soul from Nashville The 1960s Volume 2 is the last of the Ballantrae haul and the one which is causing my genre problems.
Does it go with the Soul Compilations or with the Blues Compilation? Something which has led to sleepless nights.At the moment I'm thinking Soul are there is more Soul than Blues but then again if there is more room on the Blues shelves....
First world problems, eh?

To the music. It does what it says on the tin. A collection of songs from small independent labels from Nashville
First up is Johnette  who appears on John Richbourg's Rich Record label. Other than that I know nothing..
Love Letters is  on Spar Records and is attributed to Carol Hadley but the singer is in fact Christine Kintrell using a fake name as she was signed to another label at the time.
Finally we have some Blues courtesy of Robert Garrett from Excello Records with a seemingly autobiographical song..

Johnette - I Gotta Hold On

Robert Garrett - I Don't Wanna Be Sober
Posted by Charity Chic at 08:00