O Sister Where Art Though? 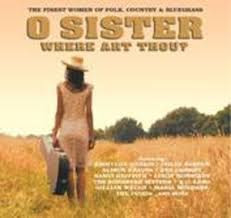 Still working my way through the holiday purchases.
In addition to the previously featured  Tift Merritt album a trip to the charity shops of Newton Stewart resulted  in the purchase of O Sister Where Art Thou? which has become an instant favourite of Mrs CC.

Released in 2002 on the WEA label it is a 40 track 2 CD compilation of female country artists cashing in on the hype and success of the music from the film Oh Brother Where Art Though?
40 tracks but only 37 artists given that Dolly Parton, Nanci Griffith and Eva Cassidy all feature twice.
Those artists give a clue to the fact that it is mainly mainstream acts who feature some of whom attempt some Bluegrass covers some succesfully, others not quite so.
As you would expect I've decided to feature some of the more Alternative Country acts

The Be Good Tanyas - The Littlest Birds
Posted by Charity Chic at 08:00