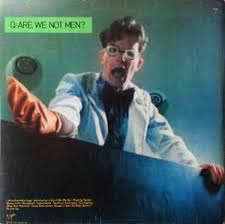 As  I  said yesterday our trip to St Andrews was yielding meagre pickings from the many charity shops there.
However that all changed in the British Heart Foundation when I checked the vinyl section after Mrs CC had picked up Ennio Morriconne.
I was expecting the usual rubbish - Jim Reeves, James Last and such like and while they were all there I struck gold.
I came away with seven albums all for 99p and all in very good condition.
I thought about listing them here but then decided that I would pad it out and drip feed you with snippets over the next few weeks.
From 1978 Q: Are We Not Men? A: No We Are Devo the  debut album by the band Devo was pretty much the newest of them all and the only one from that genre (if Devo could be described as having a genre). Here are the two singles from the album which most of you will already be familiar with.

You may well be surprised with some of the other albums purchased!

Devo - Satisfaction (I Can't Get Me No)