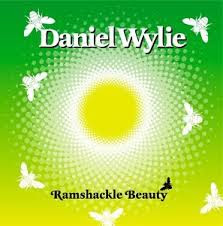 When I featured Deliverance the debut album by Cosmic Rough Riders a few days ago George advised that he had been experiencing problems tracking down a copy of this record.
He asked me for a copy and being a generous sort he offered to share Ramshackle Beauty by their former lead singer Daniel Wylie in return.
From 2003 on the Measured Records label it is not radically different from the Cosmics. Melodic pop tunes with a country or power pop tinge on occasions.Very pleasing on the ear.
Checking discogs  I was surprised to see that he released five solo albums between 2003 and 2010 and even released a Best of the Solo Years in 2016.

However impressive that is we now know that his main claim to fame is that he married a girl who lived across the road from Drew's family home.