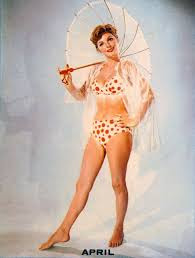 One thing's for sure and that is Julie will catch her death if she gets caught in an April shower dressed like that!
We are now halfway through the Julie London Calendar Girl series given that we started in November. Somewhat  illogical I'll grant you but given that the CD was purchased in October there is some warped logic in there somewhere.
I'm reliably informed that the song I'll Remember April is somewhat of a jazz standard although I was not aware of it. It has been covered by loads of folk -too numerous for me to mention so here is  the skinny