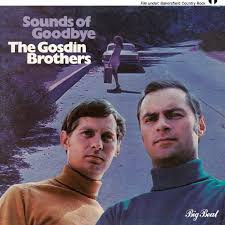 Sounds of Goodbye by The Gosdin Brothers was a pre-holiday purchase in my local Charity Shop and it is an absolute corker.
On the ever excellent Ace label there are 24 tracks consisting of their sole album of that name, some sessions, outtakes and rare folk-rock singles and all for under a pound.
The only thing I knew about them prior to this was there was a vague association with the Byrds and that they had recorded an album with Gene Clark
As the Ace blurb puts it - with a rootsy style,hip songs and harmonies of pure heartbreak, Vern and Rex Gosdin were unwitting country rock pioneers.
I can hear their influence on a good few records on the Americana shelves

The Gosdin Brothers - There Must Be Someone (I Can Turn To)

The Gosdin Brothers -Uncommitted Man
Posted by Charity Chic at 08:00