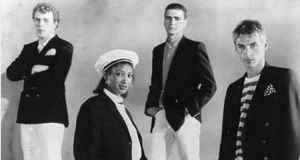 I thought I would feature a couple of songs from The Singular Adventures of the Style Council today. So I had a quick check to see what songs of theirs I had previously posted.. None was the answer, to my surprise, as they have never featured here before.
Dee C. Lee has featured with one of the song's being her take on The Paris Match.
I can't find any mentions of Paul Weller as a solo artist although I'm fairly sure that I've featured Stanley Road.
Hell,  even the Jam have only ever appeared twice and even then only very briefy..


There was a bit of a mixed reception when Weller reappeared with The Style Council given the fairly radical change of direction. Some embraced it, others were not happy at all.
I was reasonably indifferent either way.
I liked them well enough to pick up Home and Abroad and subsequently the Singular Adventures.
Can't say that I listen to them much these days though.


These two are on both records:

The Style Council - Shout to the Top!
Posted by Charity Chic at 08:00