My Name is Mable 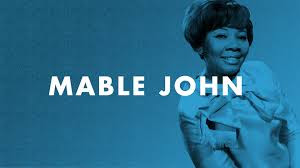 Our hotel at Balmacara was just a mile or so from the Skye bridge so it seemed silly not to pop across for an hour or so.
It proved to be a fruitful diversion as we popped into the Blythswood Care charity shop in Broadford.
Mrs CC came away with a china tea set and I left with Mable John - My Name is Mable - The Complete Collection.
19 Hi -Fidelity Soul classics on the Tamla Motown label.
Starting off as a blues singer before moving into R&B Mable was the first female artist signed to the label by Berry Gordy
She was on the Tamla label  from 1960 to 1962 when her contract was dis-continued as Berry began to  cull  Blues artists from the label.
She subsequently signed to Stax where she released her only album Stay Out of the Kitchen in 1966.

She subsequently became a Doctor of Divinity and founded a charity for the homeless in Los Angeles.
I'm happy to report that she is still going strong at the age of 88.

I'm putting this one down as a find.

Mable John - You made a Fool out of Me

Mable John - My Name is Mable