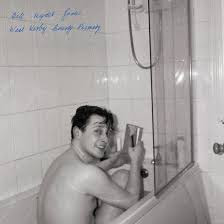 Now this is much more like it and not really what you would normally expect to find in a Fort William charity shop.
I was a bit surprised to learn that 2015's West Kirby County Primary was actually the 3rd solo album by Bill Ryder-Jones following his departure from The Coral in 2008.
I had never heard any of his solo stuff but I vaguely recognised the somewhat distinctive cover and remembered that it was critically well received upon it's release.Other that the Irish Times which gives it 3/5 all other reviews I can find give it 4/5 or 4.5/5

Wiki says it is influenced by Gorky's Zygostic Mynci, Super Furry Animals, the Strokes and Pavement.
I'm thinking more along the lines of the Arctic Monkeys and in particular Pulp with BR-J very much in the role of a Scouse Jarvis.