Why Are People Grudgeful? 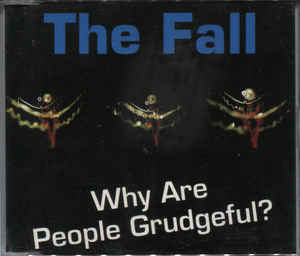 Just back from a few days away and armed with some new purchases.
CCM history was made as part of a fairly decent haul from the BRICC Community Shop in Ballantrae with my first ever charity acquisition by The Fall.
As you can see from the picture above it was the 1993 CD single of Why Are People Grudgeful? on the Australian Permanent Records label.
Had I not just read it I would never have known that it is based on two Jamaican recordings from 1968 - People Funny Boy by the great Lee Perry and an answer song People Grudgeful by Joe Gibbs recording as Sir Gibbs.
Given that 10 CDs (including 3 Jack Johnson CDs which Mrs CC had but insisted on buying again) were purchased for 3 pounds it works out as 30p for the 4 tracks!
Here is the title track and their take on Sister Sledge's Lost in Music.

The Fall - Why Are People Grudgeful?