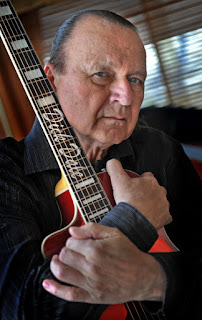 Sad news that over the weekend  two great octogenarian artists passed away.
Dick Dale - The King of the Surf Guitar  - was 81.His incendiary style was before it's time and a huge influence on many who followed.
He latterly achieved some well deserved fame when his song Miserlou featured in Pulp Fiction.

Andre Williams would have been a contemporary of Dale in the early 60's when he recorded songs such as Jail Bait and Shake a Tail Feather.
He succumbed to drug addiction and homelessness but began to record with Bloodshot Records in Chicago where he was living  in the late 1990's.
He died aged 82.