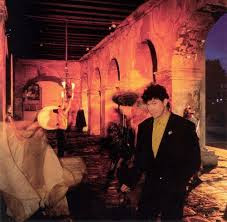 The cover alone should have been enough for me to realise that I was making a big mistake.
In my defence it was 49p and I was on holiday and conscious that I needed some new material for the blog.
Storyville is Robbie Robertson's second solo album from 1991.I can only describe the music as countrified jazz funk (but not in a good way).Some of the songs start off promisingly but they quickly end up all over the place.
Wiki advises that it focusses on the jazz capital that is New Orleans and on that part of the South in particular.
I have his self titled 1987 debut solo album which I have featured here before and it is not bad.
Sadly there is nothing of the caliber of Broken Arrow or, in particular, Somewhere Down the Crazy River, to rescue Storyville.


It's been a bit of a struggle but here is a song for your listening "pleasure". I can't bring mysef to post two.
It's going back.
I'm off to listen to The Band