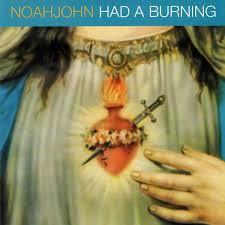 Our dear friend the Swede has obviously taking pity on me following my recent charity shop lean pickings.

He has very kindly sent me not one, but Two, NoahJohn albums namely 2001's Had a Burning and 2003's Water Hymns both on the Loose label. This has tripled the number of albums by them on the Americana shelves given that I already had 1999's Tadpoles on the Speakeasy label.
This appears to be about the extent of their catalogue although they did record an album called Country Protest Anew with Eugene Chadbourne in 2003.

So far I've only managed to give Had a Burning a listen and it is pretty solid Americana .Looking forward to giving Water Hymns a spin.
As I said to the Swede I am reasonably sure that I've seen them live but I wouldn't like to swear to it.