Retro Saturday on a Friday 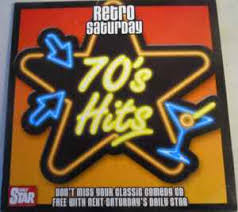 Apologies for the no show yesterday.
We were working our way back from a couple of days in St Andrews plus I was feeling a wee bit poorly.
I am giving the large number of students and indeed all the denizens of St Andrews the benefit of the doubt and assuming that they must all be into streaming as I have rarely seen such a poor and meagre show of charity shop CDs in my puff.
Seven charity shops and by the time I reached the final one on the second trawl I had only come up with one purchase which will feature on Sunday. In desperation in the last shop I resorted to this freebie from the Daily Star  -a newspaper I would be reluctant to use even if I'd run out of toilet paper.
The lady didn't even charge me their going rate of 50p and suggested instead that I make a donation to the charity tin. I did - 50p
Still there is one saving grace. It does include the great Papa Was a Rolling Stone by the Temptations which has never featured here before perhaps because I don't think I have had a copy of it until now

The Temptations - Papa Was a Rolling Stone