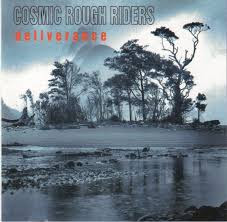 Up until fairly recently I was under the impression that 2000's magnificent Enjoy the Melodic Sunshine  on Alan McGhee's Poptones label was the first album by The Cosmic Rough Riders.
I have since discovered that they had self released two previous albums recorded in a community funded recording studio in Glasgow's Castlemilk housing scheme namely 1999's Deliverance and 2000's Panorama.

Deliverance was part of my Ballantrae holiday haul. A bit rough round the edges in places but still containing one or two great pop songs including a couple which were subsequently re-recorded and featured on their breakthrough album.

They may have recentky lost their crown as Castlemilk's finest to Gary Cinnamon but they were a splendid little band.
I'm off now to try and track down  some of Daniel Wylie's solo stuff.