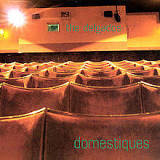 I was pretty late to the table when it came to the Delgados. They only crossed my radar in the couple of years prior to their demise in 2005 but I was fortunate enough to catch them live albeit just the once.
As is often the way discovering a band can lead to  exploring the back catalogue and over the years I have acquired all their albums with the exception of Pelaton their second album from 1998.


Like the band name and Peleton the name of their 1996 debut Domestiques is a cycling reference being the term for the support team to the leader of a bike race.
It is a bit more noisy and thrashier than some of their later releases but that's not necessarily a bad thing
In places it reminds me of Bis. Coincidentally the release of the Bis single Disco Nation 45 as the second single on their Chemikal Underground label  very nearly bankrupted them.


Fortunately Chemikal Underground survived and it is still run by the four  former band members and has been a hugely important  and influential  label over the last 23 years  promoting many great artists and records.
Long may they reign

The Delgados - Under Canvas Under Wraps

The Delgados - Big Business in Europe