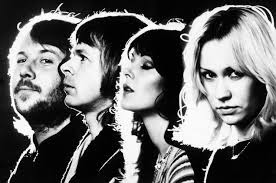 Two birds with one stone today.
There was no ABBA on the shelves until a few weeks ago when Mrs CC came in with an album of their Number Ones which was a charity shop acquisition.Splendid Scandanavian pop musuc.

Then more recently in a comment on a post Rol mentioned that he had discovered some new artists to him while listening to Radio Scotland. One was Paisley singer/songwriter Jill Jackson erstwhile lead singer of the band Speedway.
Rol mentioned that he had purchased her new album and was really enjoying it. She was an artist I used to see live quite often usually supporting bands at places like King Tuts.I always enjoyed her shows and  obtained her 2010 album Back to Zero which as it's last track has a slowed down version of Dancing Queen on it.
So that's today's post sorted.

Jill Jackson - Heart of Mine