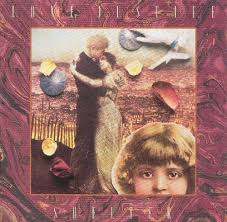 I've been meaning to get round to playing and featuring some Lone Justice for a few weeks now ever since my Thrum post with it's comparisons between the vocals of Monica Queen and Maria McKee
I knew that I had their second album Shelter from 1986 on the Geffen  label but was pleasantly surprised to find that I also had their 1985 self titled debut which is one I cannot remember buying.

I'll get round to that one in due course but first a couple of Maria McKee compositions from Shelter as that is the one I am most familiar with.
Probably a bit more poppy (and a slightly less successful one than the first one) it has production from the band, Steve Van Zandt and Jimmy Iovine
Maria left to go solo shortly thereafter.