Where Does It Go From Here 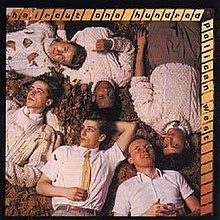 I know that it is a wee bit warm to be featuring woolly jumpers but I thought that  I would give Pelican West an airing.This is more than a wee bit inspired by John Medd's recent post
From 1982 it's the debut album by Haircut 100 and peaked at number 2 in the UK charts.It is the first of two albums by the band but I suspect that most folk will be hard pressed to remember the follow up which was 1984's Paint and Paint.
It contains some excellent pop songs all written and sung by Nick Hayward.
I am not that familiar with his solo stuff but I know that he is held in high esteem by many of the Blogging fraternity (see above).
Mrs CC I suspect is a fan given that she has two of his solo albums as well as being the owner of Pelican West.
I shall give them an airing in due course and report back.