Kim Richey at the Glad Cafe 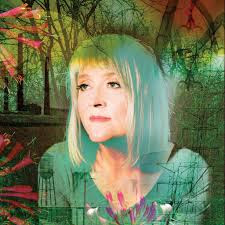 We are off to what I suspect will be a very hot Glad Cafe tonight to see singer songwriter Kim Richey perform.
She has been on the go since the mid 90's but was a relative latecomer in that she did not sign her first recording contact until the age of 37. So plenty of life experience to inform her songs.
Her music is probably on the cusp of mainstream country and Americana.
For example I was convinced that I had a version of the first of today's songs Just My Luck, from as far back as 1995, by the Dixie Chicks but this does not appear to be the case.
I think she has probably become less mainstream as time as gone by and I am looking forward to hearing hertonight.
The show is being put on by  promoter Kevin Morris under the guise of The Fallen Angels Club who has been putting on consistently good shows in Glasgow and sometimes further afield since 2004. An unsung hero.