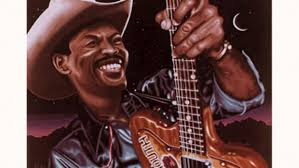 Just Got Lucky by Clarence "Gatemouth" Brown is my latest Blues Collection acquisition.
Number 35 in the series but more importantly the 49th in the series to grace the shelves.
Well over half way to reaching the total of 94.
I know that I could probably buy most of the missing ones for a pound a pop but the thrill is in the chase and in tracking them down.


Clarence was  a Bluesman born in Louisiana  but raised in Texas. A multi instrumentalist he also dabbled in other types of music and was well respected as a Blues fiddler.


The album gives a nod to influences  such as Dizzie Gillespie, Charlie Parker and Louis Jordan. A bit jazz noodley in places but he just about gets away with it.
One of the three covers of songs made famous by Louis Jordan is Salt Pork, West Virginia a depiction of small town America. A fictional town but wouldn't you just wish to visit somewhere with a name like that.


A somewhat morbid fact gleaned from the internet. His home in Louisiana was destroyed by Hurricane Katrina and he relocated to Orange, Texas. After he died in 2005 his casket floated out of it's burial site following flooding from Hurricane Ike.


A Bluesman could write a song about that!