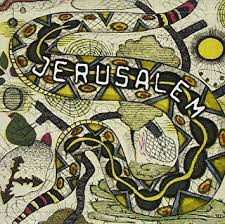 I have long been a fan of the great Steve Earle
I used to eagerly await his new releases and pick them up on the official release date or sometimes even earlier courtesy of Glen  from the sadly now defunct Salvation Sounds.

2002's Jerusalem is his 10th studio album and  the last I bought upon release. I have all his albums before this one but precious few after. I don't know whether this is down to a diminution of quality or to my tastes evolving.

Anyway it is one of his more political albums. He predicts the building of walls, sings about immigration and there is also a song about John Walker Lindh the so called American Taliban
I'm not sure whether Steve was on the  FBI and CIA's radars before this album but he certainly was afterwards.

I suspect that he has precious little time for the Orange Childsnatcher who, amazingly, this week has managed to plumb even lower depths of human decency and morality with his policy of separating migrant children from their parents. What a despicable human being.

Steve Earle - What's a Simple Man to Do?