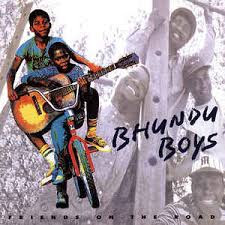 I've been listening to Rhythms of Africa a compilation from Cooking Vinyl's International Music Series a bit this week.
It should really be Rhythms of Zimbabwe given that 5 of the 6 acts who contribute two songs each are from there with the exception being Sierra Leone's S.E. Rogie.

If you don't have Shabini by the Bhundu Boys you should rectify that immediately as it is an absolute classic.Unfortunately nothing else they did came close to matching it. This track Pombi is not bad but not in the same league as those on Shabini.
There are a couple of tracks by ex Bhundu Boy Biggie Tembo on the album but they are both a bit disappointing