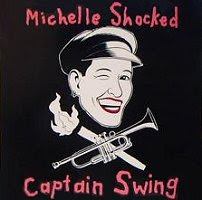 Saturday saw my first Charity Shop purchases in a while.
One of the two purchased was Captain Swing the third album by Michelle Shocked from 1989 which reached number 31 in the UK charts making it her biggest hit
I've never knowingly owned it before but I seem to be familiar with all the tracks leading me to suspect that I may have had it on tape at one stage.
Not quite as country orientated as the brilliant Short Sharp Shocked which preceded it. The focus, as the title suggests, is more on swing. A genre I'm not  at all familiar with but the ubiquitous on-line encyclopedia advises me that it is a cross-country inventory of swing musical styles—from Dixieland to Western, Big Band to BeBop.
Good to know.

Michelle Shocked - On The Greener Side

Michelle Shocked -(Don't Mess Around With) My Little Sister
Posted by Charity Chic at 08:00