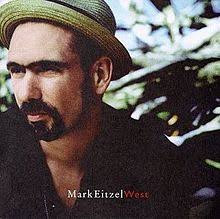 I  recently gave Everclear  by American Music Club another listen and remained somewhat underwhelmed.
So it was with some trepidation that I gave West the solo album from 1997  by their front man Mark Eitzel a spin.
Happily, this is a much better effort altogether.
Co-written with R.E.M guitarist Peter Buck who also plays on and co-produces the album.


Re-reading the comments from my American Music Club post  kevinpat (how are you doing sir? long time no hear) wrote
I don't know anything about Mark Eitzel except he sings with this rich, deep voice to some very head-scratching songs. Just reading the song titles is dizzy enough. I imagine that he's that drunk, derelict poet and it all works for me.

I can't describe it any better than that.

Mark Eitzel -If You Have To Ask