The Fine Art of Self Destruction 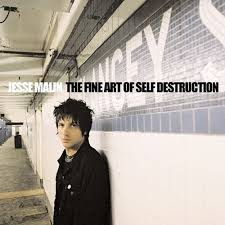 I'm going to see Jesse Malin in September. Not only that he will be supporting Chuck Prophet!
How good is that going to be??

I've only seen him the once before at King Tut's around the time that his debut album from December 2002 The Fine Art of Self Destruction was doing the rounds.
As I recall there was a fair amount of associated hype. It was produced by Ryan Adams ( who also plays guitar and keyboards and provides background vocals) at the time when the Enfant Terrible could do no wrong. At the time Ryan stated Jesse's a genius.He scares me he's so good.

Then there are the obvious Springsteen comparisons and the fact that at the time he was a bit of a Johnny Marr look-a-likey . So a good few boxes ticked there.

He fairly quickly slipped off my radar but I am looking forward to reacquainting myself with him and his music.
Here's something to keep me going until September.

Jesse Malin - Queen of the Underground

Jesse Malin - The Fine Art of Self Destruction

Just struck me that the post title could refer to  the Argentina football team!
Posted by Charity Chic at 08:00