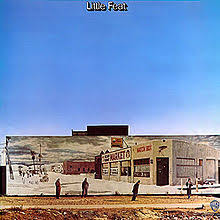 Continuing the current run of oldies but goodies here is some Country Rock for you - just the thing for these balmy summer evenings.
It comes form one of the best exponents of the genre Little Feat with a couple of tracks from their eponymous 1971 debut album.
Roy Estrada on bass, Bill Payne on keyboards, Richie Hayward on drums and the dulcet tones of the late great Lowell George on vocals.
On the second track they are joined by the pedal steel maestro Sneaky Pete Kleinow of Flying Burrito Brothers fame.
I always thought that they were from the deep South but it turns out that they were from California. Los Angeles to be precise.

Little Feat -I've Been the One
Posted by Charity Chic at 08:00